With the New Year on the way, I can’t help but think of resolutions, as most people do, however they tend to be a little different now as a parent!

Now, I’m not saying those aren’t awesome resolutions still (they are!) but I feel like when you are in the “trenches” of parenthood, sometimes you just gotta worry about getting through the day…. or to the next nap!

With that being said, my only resolution this year is to be a more patient mom. I lose my mind when my has tantrums – and I’m fully aware that it doesn’t help him (or me!),

Four years ago it probably would have been something along the lines of eating healthier, work out more, give to charity…. the stuff that I would have time to focus on if I didn’t have three kids three and under!

I’ve really struggled with maintaining my cool, and letting him work through his emotions, and am working to change that!

I wanted to let you know that I am an Amazon and Etsy affiliate and will get a very small cut if you purchase anything through these links. But these items are all awesome so don’t worry! More info about this is here

After doing some research, and testing some things out the past week or two, I’ve found what seems to be working for making tantrums not AS LONG, as well as preventing me from engaging in a screaming match with a small person just learning about his feelings!

Before I start this article, I want to say a of my research came from two books that have an emphasis on gentle parenting.

They give clear solutions to every situation, and will totally change your views on how to parent!

In researching better, more gentle parenting methods, Janet’s name kept coming up, and it turns out she has muliple books! These books are the most helpful when it comes to tantrums.

I am still amazed at how simple her solutions are that I somehow didn’t think about or consider!

These are “gentle” methods – meaning no spanking or physical punishments of any kind.

I know what we are all gonna say “Well I got spanked and I’m fine!”

I did too, and it was effective for me. I got spanked once and NEVER really acted out again. My brother though? Different story!

While some kids may respond to being spanked, I have a feeling it’s more of a fear of getting hurt being the reason for avoiding the behavior instead of actually understanding why it’s wrong.

And going through emotions, as embarrasing as it might be (even though it shouldn’t… this is normal!) loudly, and in public places, is not a reason to spank!

Plan extra time when going places (so you don’t have to rush the tantrum!)

One thing you want to do when a tantrum happens is remain absolutely calm, and be a safe spot for your child.

However, when you’re 5 minutes late for an appointment, no one is buckled in yet, and you don’t even know if you’ll get good parking… it is easy to become frustrated really easy!

You don’t have to neccessarily get in the car, but have everyone dressed, packed up and the car ready.

If you feel calm, prepared, and have time to spare, it will be alot easier for everyone involved to handle the tantrum, and let it run it’s course!

Have you EVER been able to calm down when someone told you to?

I know I haven’t! In fact, it just tended to make me even more angry!

For those reasons, don’t say things like “Calm down” to your child when they’re in the middle of a tantrum.

Besides, there’s a whole lot of other scientific reasons that prevent a child in a tantrum from simply calming down.

I found this article by Christopher Willard (A clinical psychologist who focuses on mindfulness and has published multiple books on the subject) really helpful in understanding why kids can’t just come back down in the middle of the craziness!

You yourself must remain calm – do not scream at them, or try to talk over them if they are in full freak out

I know, easier said than done (I have been the one screaming more times than I care to admit…)

the moment, we somehow think that yelling to be quiet, or blaming them for making you angry will help them to stop.

It makes it way worse!

Kids feed off your energy – ever see your child get hurt, then look at you before crying?

They are trying to see how they should act, and the same goes for tantrums!

On days that I have felt particularly patient and positive, I have been able to speak quietly, remain calm, and discuss in a loving way what’s going on to my son.

And on those days, his tantrums have been way shorter, and he recovers from them much quicker!

However, if you are low on sleep or having an awful day, it can be really helpful to take a minute before responding.

For more information on remaining calm during the storm, Janet Lansbury is sort of famous for her techniques in dealing with tantrums in all ages, and this guide is full of helpful things to keep in mind during the rough times!

If in public, don’t be embarrased to leave the area – and explain it in a way that does not seem like a punishment

Mamas, again, I have been there, and I know how hard this can be to follow!

I have said plenty of times things along the lines of “You are being awful, not listening, and we are going to leave now because of that!”

I feel so guilty… but hey, we are all learning right?

Anyways, as a first time parent you probably remember seeing other moms with screaming kids and thinking “That won’t be me, I’ll have my kid under control!”

And when that time comes, you’re embarrassed you don’t either (even though it’s not an issue of “controlling your kid”) and want to remove them!

It turns out the best way to handle this situation is still to leave, but to do it so that your child can process everything without tons of people around as well as pressure from you to stop!

You can say something like “Let’s go step outside for some fresh air and to get some space!”

I know it’s not always an option to leave, especially if you have a cart full of stuff – in which case, stroll around proudly because tantrums are part of growing up.

Every mom has been there, and as they say “This too shall pass!”

And the most important tip – acknowledge their feelings and emotions with respect!

Believe it or not, babies and toddlers don’t cry “just because”.

Their feelings aren’t less important because they are younger!

I really struggled with this because, as an adult, it’s hard to understand the breakdown over simple things like plate colors or shoe selection.

However, there is a reason for everything if you just observe, listen, and ask!

Lately when my son has a tantrum, I’ve been acknowledging his feelings with sayings like:

“I see that getting toast instead of fruit made you angry. I’ll be here when you need me so that we can talk about it!”

“What’s the big deal? You ate JUNK all day and you NEED to eat this NOW! Stop FREAKING OUT about it!”

Obviously, he is more responsive to the first one.

P.S. Mama! Here are some other articles that might help ya out!

So in my research on how to calm tantrums and remain calm, I happened upon of talk about RIE parenting.

I had NEVER heard of this before, but it stands for “Resources for Infant Educators” and is a philosophy of parenting created by Magda Gerber.

It changes everything you’ve heard about parenting – I’m talking no timeouts, less toys and entertainment from the parent, and more respect and treating your child as an adult in alot of capacities (namely, having reasonable consequences for things and not talkin to them like a baby!)

It completely changed my way of thinking!

Here are some main points of RIE Parenting (Check out this book on RIE methods the full scoop – it will completely rewrite what you thought you knew!)

If you start this method of parenting young, it will be way easier to do!

However, if you start a little older, expect some time! I know I did EVERYTHING for my son because… aren’t you supposed to as a parent?

Then I had twins and realized how much he relied upon me for everything – from simple things I know he can do, to even playing with toys!

Anyways, the REI parenting thing was a little segway from how to deal with tantrums.. but I think if you are trying to become more patient, adapting this style of parenting is the next best step!

If you’re at your wits end with the tantrums and want a new way to handle them that’s healthier for everyone, pin this to refresh later!

Guys, I almost want to cry thinking about the amount of times I just stuck my son in his room, or yanked his arm and dragged him out of the store…

But we can all change, and I know we can’t do it right every time, but it’s good to start somewhere!

Stacy Bressler
Stacy Bressler is an avid outdoorswoman, wife, and mother of three who lives in Jackson, Wyoming. She loves all things camping and enjoys sharing helpful tips, fun activities and laughable learning experiences she finds along the way! Navigating the outdoor life through the lens of humor and positivity, she chronicles it all on her website "The Crazy Outdoor Mama"

Stacy Bressler is an avid outdoorswoman, wife, and mother of three who lives in Jackson, Wyoming. She loves all things camping and enjoys sharing helpful tips, fun activities and laughable learning experiences she finds along the way! Navigating the outdoor life through the lens of humor and positivity, she chronicles it all on her website "The Crazy Outdoor Mama" 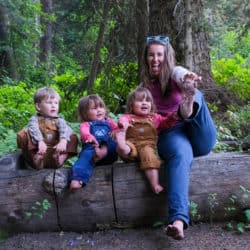 Meet the thankful, loved, TIRED, and not always outside or particularly productive (though I try!) mama behind the scenes of it all! My name is … END_OF_DOCUMENT_TOKEN_TO_BE_REPLACED

AN AWESOME KIDS CAMP JOURNAL FOR THE AWESOME CAMPING KID IN YOUR LIFE! 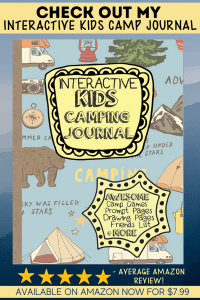